Crushed by the Belo Monte Dam?

“Their culture has been attacked, a colonial practice whose objective is domination and the destruction of a culture, which is a complex and dynamic whole … The Xingú River forms part of the world vision of the Juruna and Arara Indians in a way that we are not able to understand – it is a reference to time, space and the sacred, which are under attack.” 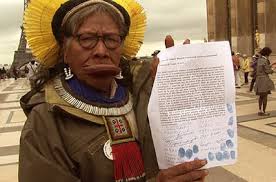 Ethnocide, the new accusation leveled against the Belo Monte hydroelectric dam, brings to light deeper underlying aspects of the conflicts and controversies unleashed by megaprojects in Brazil’s Amazon rainforest.
Federal prosecutor Thais Santi announced that legal action would be taken “in the next few weeks” against Norte Energia, the company building the dam, on the argument that its initiatives to squelch indigenous resistance amount to ethnocide.
Go on reading here.