“Extractivism creates a society without subjects”

enREDando talked with the Uruguayan journalist and intellectual, Raúl Zibechi, on the occasion of the 3rd International Congress of Socioenvironmental Health, held in Rosario, Argentina
By Vivi Benito,  enREDando 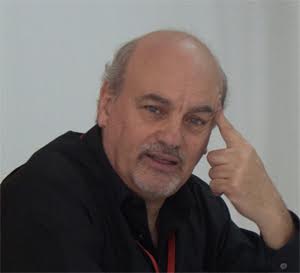 How have power relations within social movements changed since the implementation of government social policies? Why does the extractivist model create a society without subjects, or social actors? In this interview, Zibechi analyzes the social and economic situation and how it relates to social movements.
In any discussion of social movements in Latin America, particularly in their role as potential agents of political emancipation, Raul Zibechi continues to be a critical point of reference. He has spent decades researching and participating in different movements in Latin America, analyzing their internal processes and networks.
Zibechi had been charged with leading a seminar during the 3rd International Congress of Socioenvironmental Health in Rosario, in June. That same afternoon, enREDando sat down with him to talk about the current political and economic situation in Latin America and its relation to social movements. Other topics included the seemingly limitless advance of the extractivist model of neoliberalism, as well as the current cycle of progressive governments in Latin America (which Zibechi sees as approaching an end).
.
enREDando: How can you explain to our readers this idea of the end of the “progressive cycle” in Latin America?
Raúl Zibechi: Progressivism in Latin America, which broke out around 10 or 15 years ago depending on which country you’re talking about, produced some positive changes. But I think that cycle has come to an end. While there continue to be progressive governments, what I am saying is that progressivism as a set of political forces that created something relatively positive: this has ended. Basically, there are three reasons for this:
First, because with the passage of time progressivism has run out of steam, and in countries such as Argentina the Kirchner cycle has ended. What will replace it and whether it will be better, worse than or the same as before, we don’t know. But it has certainly come to an end. And in Brazil and Uruguay, governments led by the PT and Frente Amplio are exhausted, and have experienced a kind of internal breakdown.
Second, we have to remember the base on which those progressive governments were built: the prices of commodities and natural resources, which today are falling. Therefore the boost in income that had made it possible for governments to fund social welfare programs, which in turn placated the social movements – this has also been reduced. In other words, given the change in the price for commodities, either we’re headed towards austerity measures as in the case of Brazil, with the accompanying reduction in social spending, household income, and so on; or it becomes necessary to tax personal and corporate wealth in a more systematic way – this is the big problem and the one that no progressive government has been willing to address.
And lastly, I say the cycle has ended because the social equilibrium which progressive governments had been able to guarantee for the past 10 years is beginning to fall apart. One of the clearest examples can be found in Brazil, where in June 2013 millions of people took to the streets to protest against police repression and against the increase in the cost of public transit. So, the relative peace of the movement sector has broken down.
For these three reasons progressivism in Latin America stands at a crossroads: either it changes into a political movement advocating real change reaching the structures of society – ownership of land, tax reform targeting the rich – or these governments simply become conservative, which is a process I think has already begun.

Social movement activity began to calm down in the last decade, right when we started to see a lot of progress on social policies. Do you see any connection there?
I’m sorry, but I wouldn’t consider it to be progress. I think that the social policies are counter-insurgency policies, meant to tamp down on mass movement activity.
Take the case of Argentina, around 2001: there were those movements that broke down the privatization model, which had been the first phase of neoliberalism. But then what followed was a kind of institutionalization of those same movements, which had the effect of taming and domesticating them.
What social policies in fact do is convert movements so that they become part of the social structure – they have to have a board of directors, a hierarchy, and so on – so that the institutional apparatus ends up devouring the movement. There is a long history to this, right? What social policies do, then, is they accelerate this process.
Social policies are part of this counter-insurgency practice. I say this not only because they end up institutionalizing, fossilizing movements, but also because these policies guide social movement activists into working more closely with the State.
And we can see one result of this here in Argentina, where after 12 years of applying social policies almost all social movements have been converted into electoral movements. Thus, while I respect the majority of these efforts, the fact remains that what they are aiming for is a win at the ballot box.
Being so focused on elections means abandoning struggles over territory. It is in this sector where there is a very heated dispute over social policies.
[So, for example] alongside the people’s high school the State has created an official high school, and for ordinary people who live in these communities it is very difficult to distinguish between the two. Why? Because the State will give its schools names like Che Guevara or Agustin Tosco. It is thus very hard to differentiate between the two and one would have to spend a lot of time inside [a school] to tell which is which. So one outcome of this confusion is you have weakened what used to be one of the key parts of the social movements.
Today what we have are social movements converted to electoral campaigns. That, I believe, is the result of a long decade of progressivism. I’m not saying it’s bad to try and win elections, but rather that [by doing so] the movements have abandoned struggles over territory, and the work of mobilizing the grassroots in a struggle for social transformation.

In what way can we think about this situation of the social change agent being gradually weakened by the extractivist model of neoliberalism? How is it unlike, for example, the case of the factory worker during the time when industry was very strong in Argentina?
Extractivism creates a dramatic situation – you might call it a campo without campesinos – because one part of the population is rendered useless by no longer being involved in production, by no longer being necessary to produce commodities.
But we also have forms of urban extractivism, cities where the poor are pushed further and further away. And if this functions at full throttle you end up without any villas [shanty-towns] at all. But what’s going on now is a lot of resistance: among many other things, the villas have become spaces of resistance and grassroots organizing.
The extractivist model tends to generate a society without subjects. This is because there cannot be subjects within a scorched-earth model such as extractivism. There can only be objects.
Thus, in order for the movements to rise up they will need to do so on the margins of the extractivist model. It is very difficult to organize people in such a situation. They are truly outsiders. Which places on us the tremendous burden of organizing people in the worst kind of poverty, who are living on the margins without any ties to the formal economy and with little to fall back on in terms of a social safety net. This is another of the insidious effects of the extractivist model.
To the extent that there are no subjects or social actors in the productive process, this then eliminates the possibility for collective action – the labor movement you mentioned earlier was itself composed of people actively involved in the productive process. Within the labor movement, the factory system relied on a huge number of workers; these normally were people who came into the cities from rural areas, from farms. They made their living in the factories and became consumers. So there used to be people at both ends of the process: production and consumption. Now all that is disappearing. What we’re left with is a huge mass of people who relate to one another and find their place within society through consumption – and this is the worst way for people to be fully integrated in a society because it does not generate consciousness. You become fully integrated by struggling for your rights, or through organizing to struggle for something else.
In this way, as you come into your consciousness, you become integrated. So it’s easy to see, then, that there are people who are outsiders and who have become wrapped up in consumerism, or who have used drugs and gotten into trouble with the law.

Within this somewhat discouraging framework that you’ve just been describing, how does one not get depressed and demobilized? Do you see any light at the end of the tunnel? Any possible avenues for pursuing change?
I see plenty of light. Take the situation in Brazil, for example, where there are enormous struggles going on, including in the favelas which are the most difficult to organize; there are also incredibly powerful movements among students and indigenous people in Chile, not to mention very strong anti-mining campaigns in Peru, Colombia, Ecuador and Argentina.
It’s also encouraging to witness quite concrete victories against the extractivist model, like the one in Malvinas Argentinas (Cordoba).
But let’s look at who these activists are: they are social actors who didn’t exist before this particular struggle but rather were formed in the context of combat: [in the case of Malvinas Argentinas] they arose because they didn’t want a Monsanto complex. They are also very diverse: youth from the barrios, housewives, teachers. It gives me a lot of hope because they have all been carrying out important struggles, which are at the same time struggles of a new sort as they are not directly tied to the labor movement. Today really small groups are doing really big things. If you look to the group that’s been fighting in Malvinas Argentinas, that is a very tiny group but one which has accomplished enormous things. Like for example they’ve succeeded in attracting an ever-increasing number of people to their organization.
I see that political and ethical choices like that of standing up to extractivism have large political repercussions. One can slow down Monsanto’s plans in Malvinas, or paralyze mining operations, as has been done in many parts of the world. Among groups that have had success like this I would mention the Union of Citizen Assemblies (UAC) in Argentina.
We’re beginning to see more and more communication between rural issues and urban issues – in the campos you have mass use of herbicides like glyphosate, soybean monoculture, but then in the cities there’s the kind of real estate speculation which is being pushed by consumer capitalism. I believe that it is important to continue deepening this dialogue, and spaces like the one we’re in now [the 3rd International Congress of Socioenvironmental Health] are a way to connect the wide array of activists working on these issues – people who normally find it quite difficult to meet face to face.
From Upside Down World, translation by Seth Kershner
Foto: Verena Glass