Indigenous Resistance in the Metropolis of Megaevents

11 Nov 2015 Indigenous Resistance in the Metropolis of Megaevents

By Aldo Santiago, Upside Down World 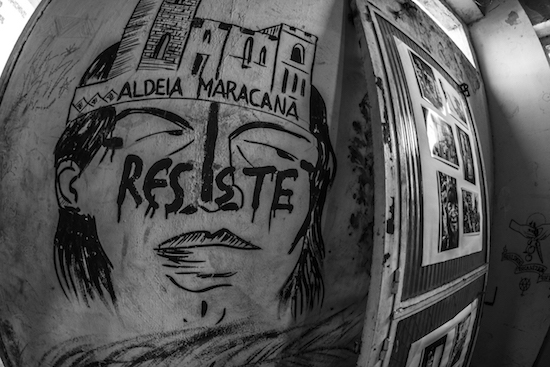 Yellow Macaw: A sacred bird who invokes the struggle for liberty and the resistance of the peoples of the earth. As a spiritual, collective, historic, and immaterial expression of the common good, its song is echoed in the percussive instrument of warrior and spiritual use, the ancestral heritage of thousands of indigenous people from Abya Yala. Crafted from a squash, whose core holds seeds, history, and cosmologies, the instrument’s song unites struggles and peoples for the liberation from all oppressions. It has no owner, and during rituals it is passed from hand to hand, emphasizing the collectivity and union of the community. This is the definition of Marakaná.
October 20, 2006. Fifty representatives from twenty of Brazil’s indigenous communities organize the 1st Congress of the Tamoio Movement of Indigenous Peoples at the State University of Rio de Janeiro. When it ends, a crowd exits towards 127 Machado Street in Rio de Janeiro, Brazil. They walk under a fine rain that helps empty the streets along their path. This facilitates the reoccupation, barely interrupted by two guards who nervously point their weapons toward the masses. Upon talking to them, the indigenous activists explain that they are reclaiming the house of their ancestors in a peaceful occupation. It will be known thereafter as Aldea Marakaná.
From Museum to University
Famous for housing the former Museum of the Indian from 1953 to 1977, created by Darcy Ribeiro, the Aldea Marakaná’s history dates back to the nineteenth century when it was built by the Duke of Saxe in 1862 and “gifted” in 1910 to Brazil’s Indian Protection Service, a state body created in the same year under the initiative of Marshal Rondon and the precursor of the current National Indian Foundation (FU    NAI). The space was intended to help preserve the cultures of indigenous Brazilians in a zone from which, centuries before, the indigenous Tupinambás had been expelled. After the relocation of the museum to Botafogo in 1978, the building was abandoned until the 2006 indigenous reoccupation.
“Each day we’ve had a battle to fight, for seven years, to reclaim the indigenous territorial rights to manage the property, whose total area is 14,300 square meters,” shares Urutau, an indigenous Guajajara-Tenetehara professor of the Guaraní-Tupí language and member of the Aldea Marakaná Resistance, a group that transformed the dilapidated mansion into the first Indigenous Intercultural University of Brazil, a space which sought to promote cultural exchange and transformation through encounters with diverse ethnicities as a way of starting a conversation among the residents of Rio de Janeiro.
Every Saturday the doors were open to receive those interested in learning about indigenous cultures through direct dialogue and not only through references or documents that presented a distant community.  It was at this site that courses in agroecology and forest cosmology were taught; rituals were performed such as women’s circles; indigenous languages were learned; a seed research lab was founded.  All this as part of a university project developed and implemented to support members of 305 native peoples of Brazil, who turned the site into an indigenous embassy.

Monica Lima, a Manauara woman from the Brazilian Amazon, is found sitting on an old, chewed-up armchair in a half-empty room of the Cayure Center for Social Cultural Resistance and Environmental Ethnoknowledge (CESAC) in the northern region of Rio de Janeiro. Her voice, almost a murmur, nonetheless offers a firm recount of the key points of the inherited struggle over the territory of the city. “We are defending our project of liberatory education in the Indigenous Intercultural University to preserve coexistence and autonomy as principles that have already led to international ties; we receive people from Bolivia, from Ecuador, among others. Today we continue in our political struggle, our university remains alive; we give classes in Cinelándia [a public square in Rio de Janeiro] or at events organized by CESAC, including in some universities and municipal institutes;” she says, outlining the work done following the repression of 2012 and 2013 when the police shut down the Aldea Marakaná and seized the property from the indigenous community.
Indigenous resistance in the metropolis of megaevents

With the threat of the FIFA World Cup came the pretext for companies, in complicity with all three levels of government, to begin looking at the land with new eyes. The challenges intensified and became constant threats of eviction so that the space might be transformed into a parking lot, a mall, or any other thing to create profit – anything as long as it does not advance the lives of indigenous people.
The Marakaná Residential Complex, formed by the Favela de Metro (which for three years has housed a dozen of the more than 700 families that resisted the demolitions and evictions),the municipal school Friedenreich (tenth best school in the country), Célio de Barros Olympic Stadium and Júlio Delamare Water Park, besides Aldea Marakaná, are all buildings which attest to two processes which took place (and continue today) in the city: privatization and authoritarianism. These processes have been imposed on the population, resulting in violent evictions, home demolitions, as well as gentrification and extensive real estate speculation.
Despite the plans for demolition of these sites, declared public in October 2012 and valued at the ridiculous sum of half a million reals, Aldea Marakaná and its neighbors have resisted and become symbols of struggle through the occupation of the building. The first blow to the movement came on January 12, 2013 when the indigenous people resisted the attempted invasion of shock troops from theRio de Janeiro Military Police who illegally intended to clear out the building. After backing down that day, the police returned on March 22.

Using tear gas, rubber bullets, and even an ultrasonic weapon (utilized for the first time to disperse protestors in Brazil) against children, adults, and the elderly, the building with more than 150 years of indigenous history was cleared out in order to build a parking lot; a project devised and executed as part of the plan of the Maracaná Committee, made up of politicians’ favorite company Odebrecht which “won” the bidding process to reform and manage the area over the next three decades.
After leaving the site, the indigenous people rejected the lies of the state of Rio de Janeiro, which had promised to convert the site into a “living museum of indigenous culture” with an inauguration date of 2015 and resettle the community in Jacarepaguá. Aldea Marakaná was one of the first movements to be put down violently and this was not a coincidence: It offered a political space where a diversity of movements came together, which led then-governor Sergio Cabral to destroy this space of political articulation.
According to a report from the Popular Committee on the World Cup and Olympics in Rio de Janeiro, as of June 2014, 3,507 families (12,275 people) had been removed from twenty-four communities to break ground on projects valued at 2 billion dollars linked to mega events. Meanwhile, another 4,916 families from sixteen communities remain under threat of eviction. After evidence of politically-motivated privatization of public spaces came to light, revolts exploded in mid 2013.
It was in this context that the Aldea Marakaná was reclaimed on August 5 and cultural activities in the space were resumed. By September, the judge of the Seventh Court of the Municipal Treasury signed an injunction that prevented the demolition of the building and required the return of the land to its indigenous occupants. In spite of this, on December 16, 2013 corporate interest used violence in a new, illegal action, deploying hundreds of military police against fifty indigenous people, abusing and arresting half of them in order to empty the building.
Facing imminent displacement, Urutau climbed a five meter tree and stayed there for twenty-six hours in protest of the state’s violent actions. In the end, a team of firefighters managed to remove him from his refuge and he was transferred to the 18th Police District. Resistance, disobedience, and contempt were the crimes charged to all of the indigenous people; a 500 year old tradition. Seven days later, Urutau managed to enter the property in order to remove his belongings and he testified to the sacking of the Aldea.
Since then, the building has remained permanently occupied by the police, the area closed off by patrol cars and fences.
Monica picks up the story about the displacement. “At the moment of the eviction more than seventeen ethnic groups lived within the Aldea Maracana, each with several representatives. Today, the area remains abandoned; they have cut down trees, built a parking lot, demolished the seed laboratory and laid asphalt across most of the site. We have, since late 2013, a legal sentence stating that we are to take on the management of the space according to our culture and customs. Who has followed out with this sentence delivered by the judiciary? No one, as of today. It is the permanent state of exception.

“Our project is a political and pedagogical struggle for autonomy, self-management; we are not interested in disputing this power [the State] because we want to develop alternatives for people already fighting, says Monica. “Young people are going out to the streets, fighting for survival against violence that takes place each day in the favela. The struggle in rural areas has already been underway for a time. I think it will all come together in a moment as it did in June of 2013. In these times of extreme violence, it seems that a leap of consciousness springs forth almost immediately…You must choose your side, there is not much time to decide, but you look at your identity, your memory, what is inside of each of us, then you know which side of the struggle you are on.”