The Global Crisis of Displacement and Evictions

14 Mar 2016 The Global Crisis of Displacement and Evictions

A Housing and Land Rights Response. 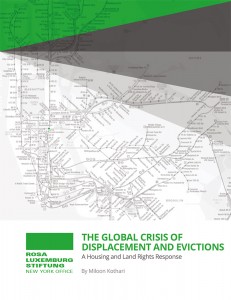 The world is living through an unprecedented housing crisis. Approximately 1.6 billion people are considered to be inadequately housed, while one hundred million are homeless and another sixty million have been displaced from their homes.
Unless something is done about it, the rapid urbanization of the world’s population is nearly certain to exacerbate these figures. This crisis is multi-faceted, including issues ranging from forced evictions to displacement to gentrification; from the mortgage crisis to the austerity-driven decline in public housing to the exponential growth of slums. The worldwide housing crisis is being precipitated by war and destruction; by natural disasters and climate change; by misguided and capital-driven development. But most of all, it is being driven by a neoliberal model that fails treats housing as a commodity instead of as a fundamental right of all humans living on this planet.
The United Nations as well as other international organizations and civil society bodies have in various ways sought to bring attention to this issue and provide tools to assist other organizations, state actors, and non-state movement groups in helping to stem the rising tides of the housing crisis. International organizations are invaluable in establishing normative human rights frameworks and putting pressure on those who are violating people’s housing rights. The question is what exactly they are doing, how they can be most effective, and where they fall short in their fights to halt the housing crisis.
In this study Miloon Kothari, the first appointed United Nation’s Special Rapporteur on Adequate Housing, reports on the global housing and land crisis and the many human rights violations that it constitutes. He focuses particularly on forced evictions and other forms of displacement caused by war, persecution, and disasters both natural and man-made—for instance those driven by misguided or ill-intentioned development policies.
As UN Special Rapporteur, as well as founder and former director of Habitat International Coalition’s Housing and Land Rights Network, Kothari has played an important role in shaping UN responses in the form of global standards on housing rights, displacement and evictions. In his study he gives insights into the UN approach to the housing and land rights crisis and critically discusses to what extent these standards are currently being implemented on the national and local levels. Kothari concludes with recommendations on how to curb the power of state and corporate actors to expropriate land, and how to better protect people from homelessness, displacement, and other forms of inadequate housing.
Housing justice and urban politics represent a core area of work at the Rosa Luxemburg Stiftung’s New York office. This study is the second in the “City Series” and marks both a continuation and a deepening of our commitment to this urgent political topic. The first study in the series, “Austerity Urbanism” by Jamie Peck, can be accessed here.

Continue reading in the pdf: 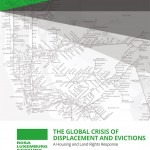 THE GLOBAL CRISIS OF DISPLACEMENT AND EVICTIONS
A Housing and Land Rights Response
Download the pdf.
Author: Miloon Kothari
December 2015