Besides the memories of the competitions that the entire world watched on TV, what remained after the party was over? In the search for the promised legacy, Instituto PACS presents an analysis to show what the situation is like in the Olympic city of Rio de Janeiro one year after the Games

By Instituto PACS
More than 42 billion Brazilian reais were spent on a 30-day event. For the residents of the city, was it worth it? When Jacques Rogge, the then-president of the International Olympic Committee (IOC), announced in October 2009 that Rio de Janeiro had been chosen to host the Olympics, politicians and ex-athletes embraced in joy, as if they were at an Oscar ceremony. The crowd on Copacabana beach cheered when they heard that for the first time ever, a city in South America would host the Olympics. The Marvellous City had lots of time to prepare and turn itself into an Olympic city. It was like a dream come true. What could possibly go wrong?
The Institute of Alternative Policies for the Southern Cone (PACS) has been following the social and economic impacts of mega-events in Rio since the city was chosen to host the Pan American Games in 2005. For this, the Institute produced studies and pamphlets and supported civil society networks that are critical of this predatory business model.
This English summary of a publication elaborated originally in Portuguese by PACS (Institute of Alternative Policies for the Southern Cone), with the help of partners, aims to present a brief image of the post-Olympic period as a mosaic of issues. The intention is to bring to public attention important issues that provoke discussion, analyses and critical, more in-depth studies on the distance between the legacy that was promised and the reality of the daily lives of the city’s inhabitants once the mega-event was over. Does a legacy exist? If so, for whom?
Those are the questions discussed by the report Post-Olympic Rio: The legacy of the Games one year later. Click on the image to read it. 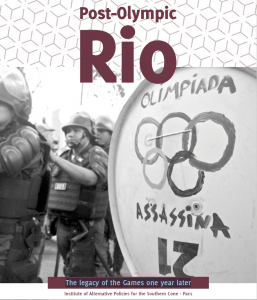 Post-Olympic Rio: The legacy of the Games one year later
Released by the Institute of Alternative Policies for the Southern Cone (PACS)
Translation: Karen Lang
Support: Fundação Heinrich Böll and Dreikönigsaktion
Downlowd (pdf)