Our programme at the World Social Forum 2018 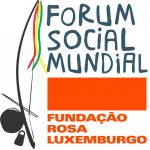 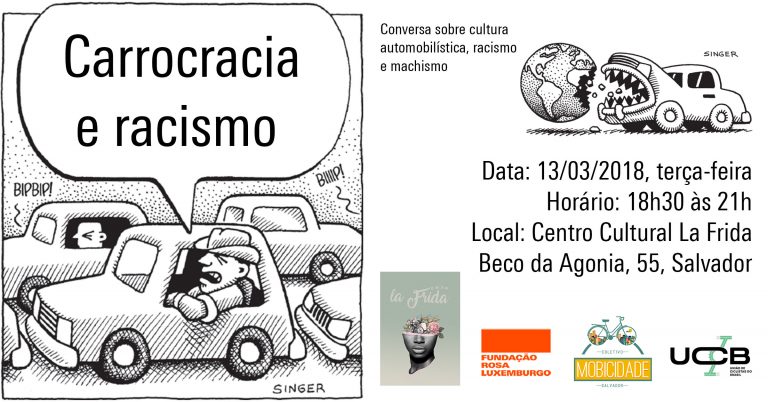 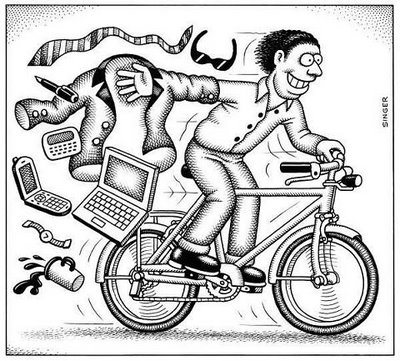 9:30 – 13:00 – Global climate justice in an age of false solutions  (in two parts)
Facing the phenomena pointing to climate change, there a various, and often conflicting, positions of national states, economic groups and different sectors of civil society. There is a tendency of right-wing governments to deny global warming and there is an attempted imposition in the multilateral summits of proposing solutions that benefit the capital more than the climate. There are discussions about causes, effects and solutions and there is a resurgence of conflicts in the areas affected by climate change and by the measures implemented by the different interests linked to capital. This event will discuss the situation presenting the experience of some countries and analyzing nuances of political positions as well as proposals of green capitalism
UFBA – PAF III, room 211

9:30 Round table with Lorenz Gösta Beutin, member of the German federal parliament for Die LINKE. He will talk about the “energy transition” (Energiewende) in Germany and the increasing difficulty of implementing climate justice policies in a context in which Germany’s political system is quickly moving to the right. Tetet Lauron (IBON, Philippines) will present the challenge of being a militant and making climate justice politics under the government of an authoritarian president. Fredson Guilengue (FRL Johannesburg) will tell us about South Africa where climate justice policies mix with the corporate and state interest of the mining; Verena Glass (FRL São Paulo) will point out the social and environmental setbacks in Brazil promoted by the Bancada Ruralista (rural parliamentary group) in Congress. Finally, Ana Magalhães (Repórter Brasil) will present the Ruralômetro, a mechanism which shows the action and the support of parliamentarians in relation to deforestation vectors and social and labor injustices; Facilitator: Tadzio Müller (FRL Berlin)
11:30 Round table with Sabine Minninger (Bread for the World, Germany) who will talk about the initiative Insuresilience, a new investment fund for climate risks and Jutta Kill (World Rainforest Movement), who will talk about the REDD+ policies in Brazil and the world; Facilitator: Tadzio Müller (FRL Berlin) 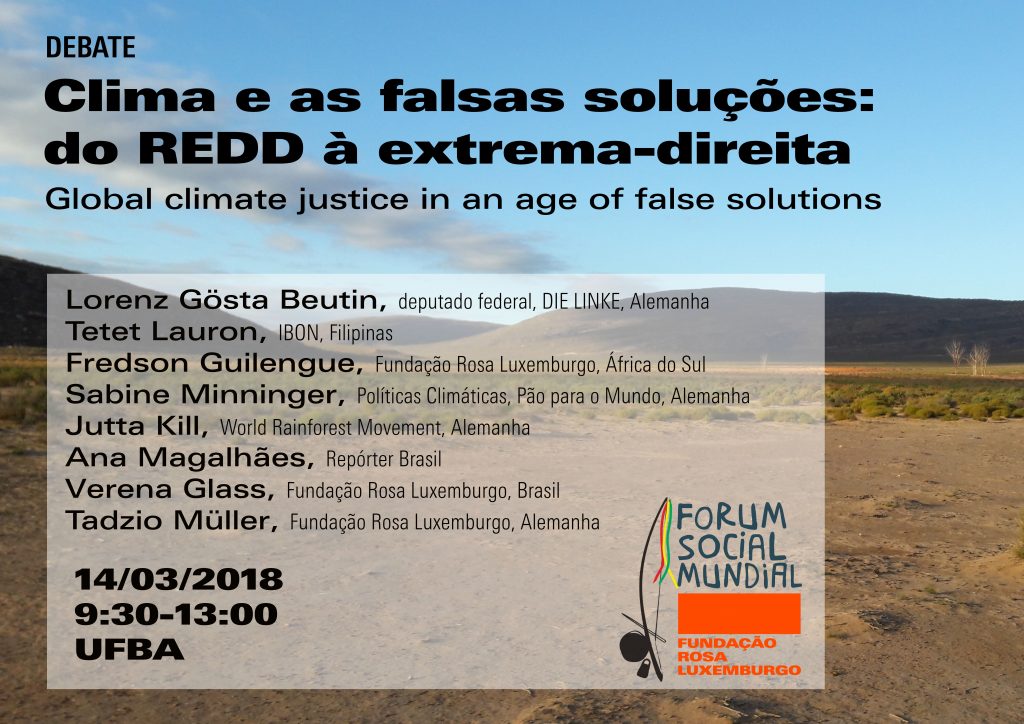 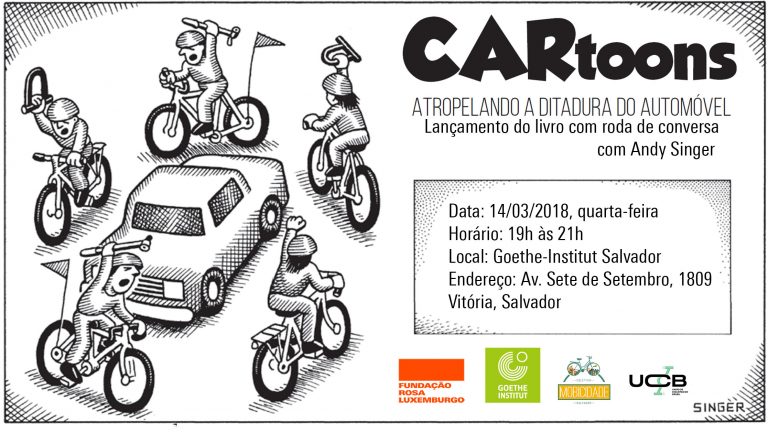 Thursday 15 March
9:00 – 13:00 – Brazil’s popular communication network: A network of solidarity (in Portuguese only)
UFBA – PAF I, room 213
Núcleo Piratininga de Comunicação | FRL
09:30 – 13:00 – The EU-Mercosur trade negotiations – the latest vampire treaty
After practically two decades without moving forward, representatives of the Mercosur and of the European Union are accelerating the negotiations to close the deal of “free trade” between the commercial blocks. The proposals are being discussed secretly  and civil society hasn’t got access to the details that are being arranged. At the same time recent experiences of “free trade” agreements and some leaked information point to negative consequences of those agreements. We are going to discuss likely impacts of the European Union-Mercosur agreement and how to organize resistance against this new colonizing offensive
FRL| Rebrip | Argentina Mejor sin TLCs | Attac France | Attac Espanha | Bread fo the World | Coalizão de Deputados de Esquerda do Parlamento Europeu | Rede de Gênero y Comercio| Sindicato ELA (País Vasco) | CADTM
UFBA – Geoscience Auditorium A 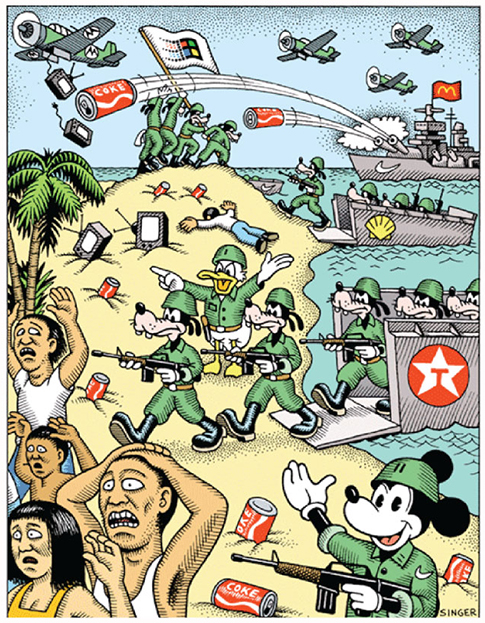 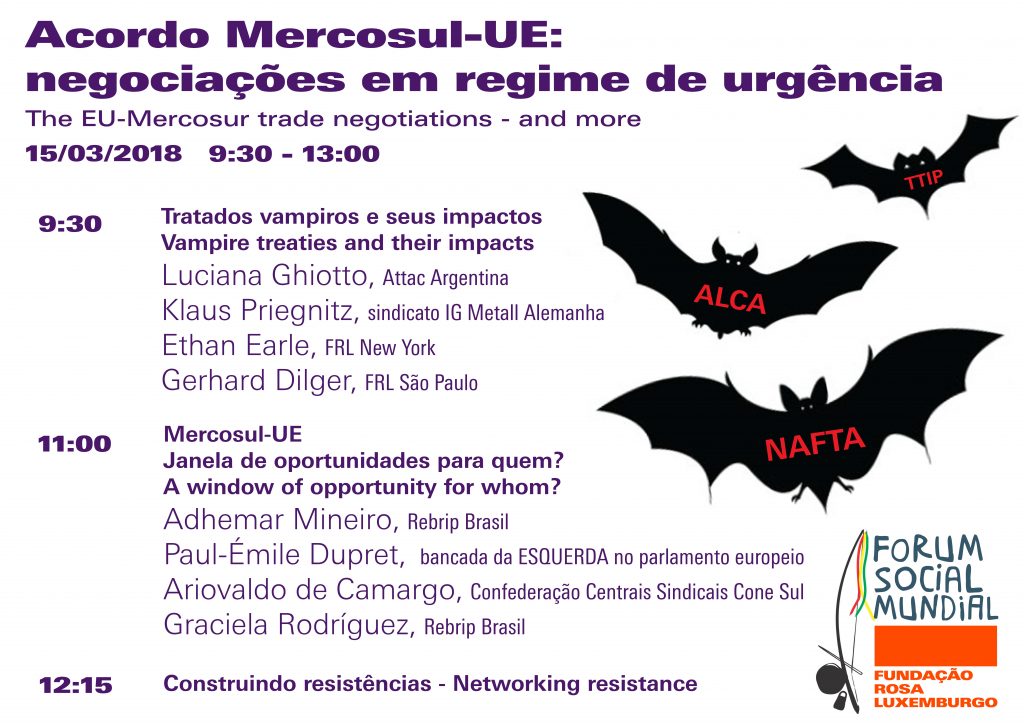 13:00 – 15:00 – Bioeconomy – the new face of agribusiness (in Portuguese only)
Bioeconomy has big ambitions: fighting climate change and replacing the fossil base of economy with biomass. Thus, bioeconomy tries to redefine old-style agribusiness: By using prime material based on renewable natural resources (”bio”), it proclaims itself as an answer to topical challenges, affirming “decarbonization ” of the economy as a new development paradigm. The panel will take a critical look at these tendencies.
With Camila Moreno (Brazil), Naiara Bittencourt (Terra de Direitos, Brazil), Thomas Fatheuer (FDCL/KoBra, Germnay) and Stig Tanzmann (Bread for the World, Germany)
UFBA – PAF I, room 214
KoBra | FDCL | Terra de Direitos | Bread for the World | Heinrich Böll Stiftung| RLS

16:00 – 18:00 – “Tarifa Zero”: perspectives and examples of free public transport policy in Brazil and abroad
Round table with Daniel Caribé, former member of the Free Transport Movement and researcher of the University of Architecture of the UFBA; Judith Dellheim, German researcher of the Rosa Luxemburg Foundation Berlin who has been accompanying different processes of implementation of free public transport policies in Europe; and Lucio Gregori, former secretary of transport in São Paulo and defender of the “tarifa zero” system; facilitator: Daniel Santini (FRL São Paulo)
UFBA – Faculty of Architecture, Auditorium 1 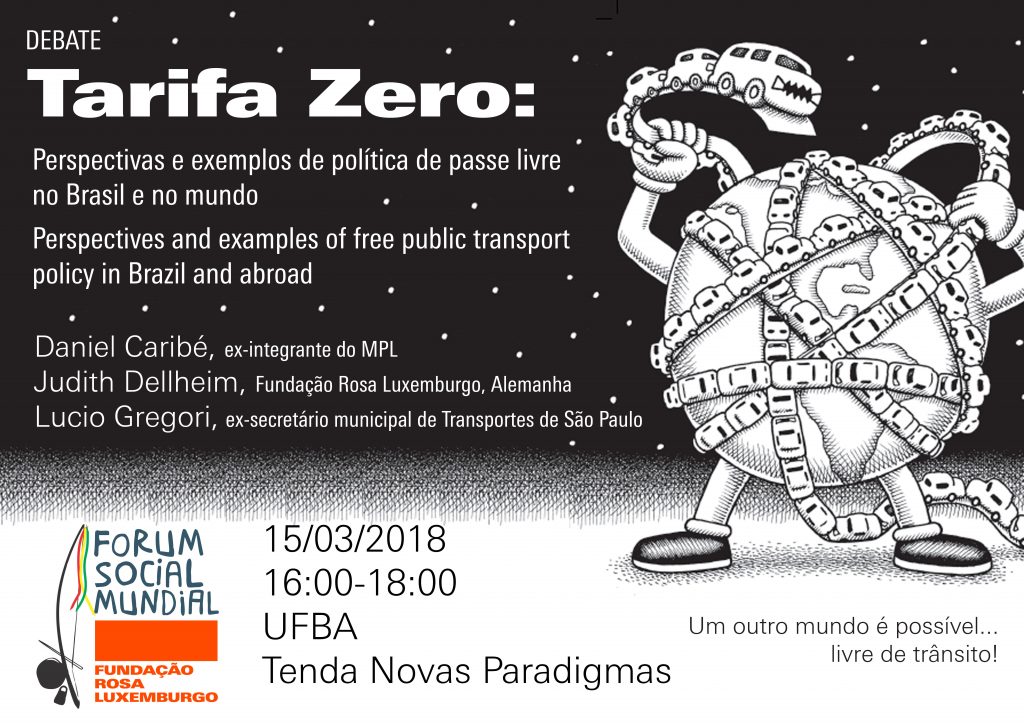 The theatre director Diol Mamadou, from Senegal, and the Homeless Workers’ Movement of Bahia(MSTB) present open-air theatre in the Praça das Artes of the Ondina Campus of the Federal University of Bahia (UFBA). The performance “Saltamos Juntos” (We Jump Together) has scenes created in a process of sharing experiences between Mamadou and the movement. Both the movement and the director use art as a way to emancipate themselves politically.
UFBA – Praça das Artes
Goethe-Institut Salvador-Bahia | Fundação Rosa Luxemburgo | Teatro Fórum Kàddu Yaraax | Movimento Sem Teto da Bahia 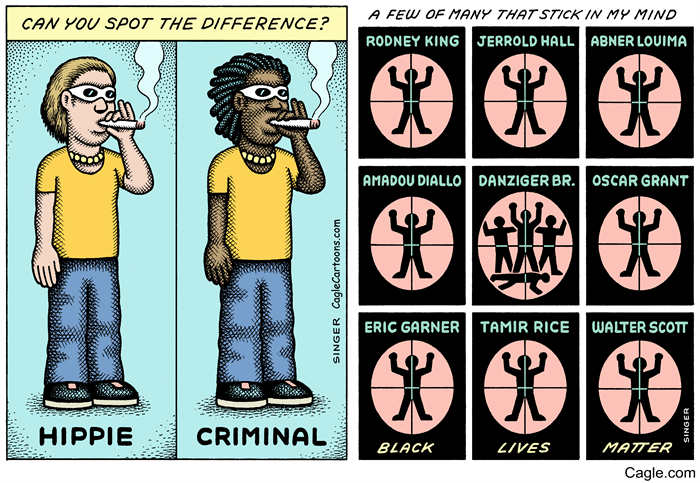 19:00 – 22:00 – The Theatre of the Oppressed between Africa and Latin America
Presentation of scenes of Forum Theatre. This event brings together the theatre director Diol Mamadou (Senegal), the Bahia Homeless Movement (MSTB), the popular movement La Dignidad (Argentina) and Julian Boal, practitioner of The Theatre of the Oppressed, founded by his father Augusto Boal, one of the big names of contemporary international theatre.
Theatre of the Oppressed was created to align the theatre to social action, using art as an instrument for emancipation. Dramatic creation is more than a product for consumption – it is praxis for popular struggles. Today, this method is experiencing a paradoxical destiny, in which its notable global expansion combines with the dilution of the strength while practicing criticism.
Diol Mamadou is living in Salvador as a resident of the Vila Sul Arts Residence Program of the Goethe-Institut Salvador-Bahia. He is the artistic director of the Forum Theatre Kàddu Yaraax and creator of the Senegalese Festival of Forum Theatre. This season, he has been organizing a workshop for a group of members of the MSTB, getting to know his occupations and philosophy, sharing the way he uses Forum Theatre as an instrument of decolonization of the theatre in the social struggles in Senegal. The resulting scenes will be presented at the event as well as the scenes brought by the popular movement La Dignidad, from Buenos Aires.
Teatro do Goethe-Institut – Av. Sete de Setembro, 1809 – Vitória
Goethe-Institut | Rosa Luxemburg Foundation | Forum Theatre Kàddu Yaraax | Movimento Sem Teto da Bahia | Movimiento Popular La Dignidad | Instituto Augusto Boal 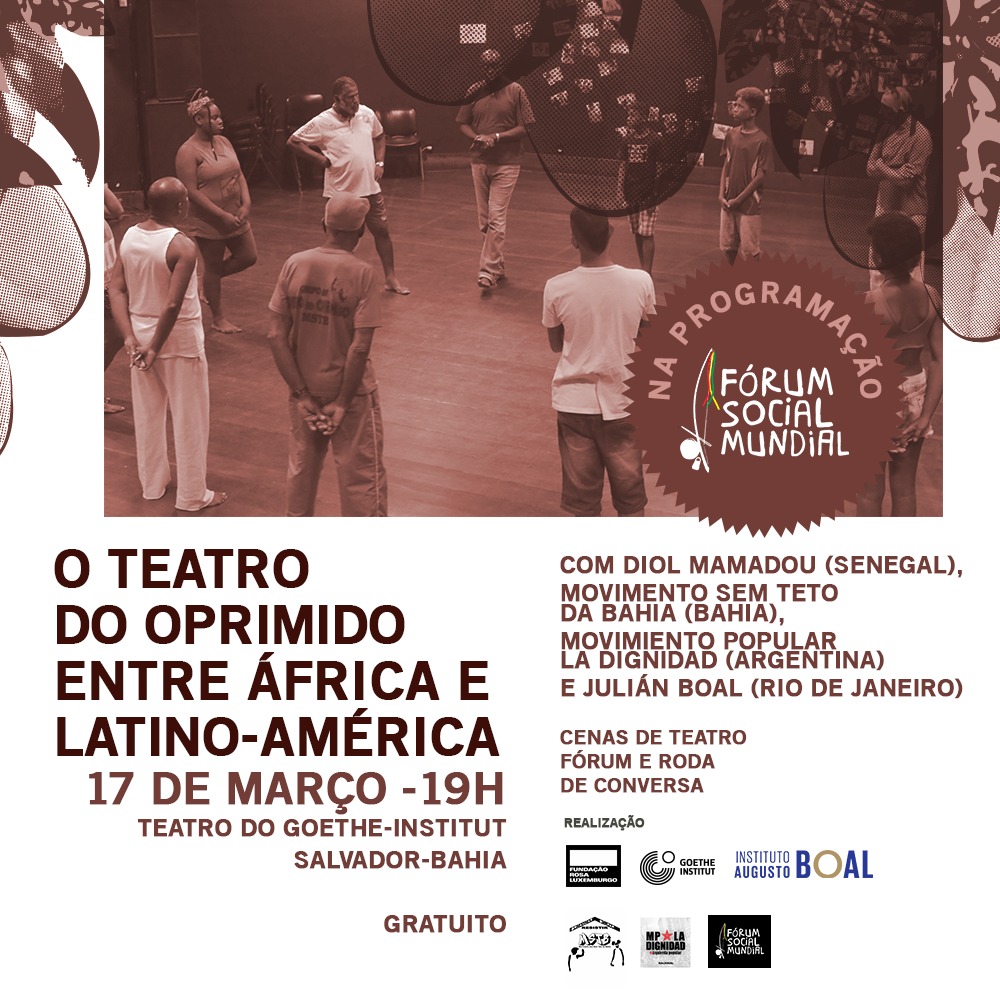