Argentina will lose jobs and industries

Views from the South 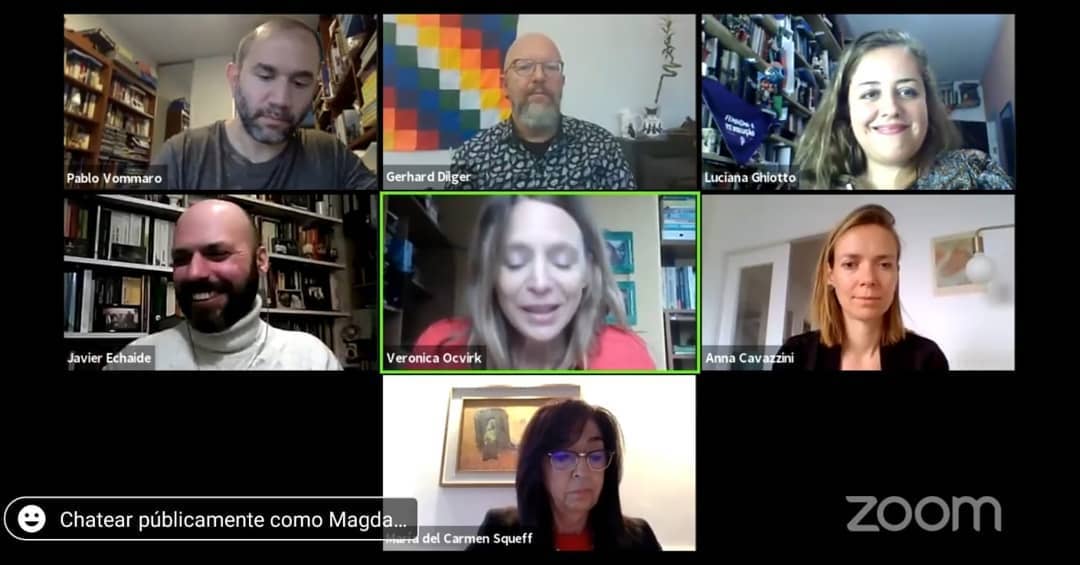 Last year former Argentine President Mauricio Macri celebrated the EU-Mercosur Free Trade Agreement (FTA), a treaty between two asymmetric trading blocks that is currently under legal review. It  would expand benefits for transnational corporations and reinforce existing asymmetries.  A reduction in Brazilian markets for Argentine products is another likely consequence.

“President, we have an agreement!” This WhatsApp audio message went viral in Argentina with the excited voice of former Argentine Foreign Minister, Jorge Faurie. Just one year ago Ambassador Faurie sent this message to Mauricio Macri who was then president in Argentina. Trade negotiations had just ended, the conclusion of 20 years of Free Trade negotiations between the European Union (EU) and Mercosur.

Thus ended two decades of a stalled tug-of-war between government officials and businesspeople on both sides of the Atlantic. In 2016, after the parliamentary coup against Dilma Rousseff in Brazil, these stalled talks gained a renewed momentum and on 28th June 2019 marathon deliberations on this trade treaty ended, though they are still not signed. The Argentine government announced a “key pillar of the national productive transformation”.

The final text of this agreement has now moved to the technical review stage, but it is by no means certain that this will be finalized. To begin with, it must be presented to each of the four national congresses of the Mercosur member States. In Europe the draft treaty must navigate a complex institutional framework to be ratified that will include some supranational bodies, such as the European Parliament and the EU Council, as well as other national authorities.

Last year the Austrian parliament declared their disagreement to the accord, while the Dutch parliament has just rejected it. The Dutch decision, although not binding, is starting to expose an adverse political scenario.

What would this agreement really entail? Who wins, who loses, and what impacts could the treaty have, on the environment, on the nature of the national economies within these trading blocks, on employment, and on the daily lives of the nearly 800 million people who live there?

Throughout the negotiations there was precious little public information and few rigorous impact studies that could quantify these effects. The technical review phase is also being held behind closed doors.

In order to look into these issues, the members of the Green Group of the European Parliament generated a call for academics, someone who could undertake a holistic, serious, acute and detailed impact study on the possible consequences of the treaty for those countries that sign on.

They chose two Argentine academics, a political scientist, Dr. Luciana Ghiotto, member of Attac Argentina and researcher in the Argentine National Scientific and Technical Research Council (CONICET) based out of the University of San Martín. Dr. Ghiotto was recently, and rather unexpectedly, in the Argentine news when her name appeared among the academics spied on by the Argentine Federal Intelligence Agency during former Mauricio Macri’s government. Javier Echaide, lawyer, and CONICET researcher based in the University of Buenos Aires, also from ATTAC Argentina, is the co-author.

Both authors studied every section of the more than 400 pages of the drafts of the agreement. They published their results in a book: “The Agreement between Mercosur and the European Union. An integral study of its clauses and effects”. A Spanish version of the report has just been published by the Latin American Council for the Social Sciences (CLACSO) in collaboration with the Rosa Luxemburg Stiftung.

“Trade agreements negotiated today shape economic exchanges in the long run. Industries and governments adapt to their rules, trade flows change, and development models are constrained or enabled by their content. Their effects are felt throughout economies”, warn Green MEPs Anna Cavazzini and Yannick Jadot in the foreword to the English edition.

We didn’t just look at the impacts on trade, on how many jobs are lost in a certain sector, on the effect on employment.  Of course that is important, but we added a chapter on services, another on public procurement and another on intellectual property”, explained Dr. Ghiotto during the book’s presentation. Co-author Dr. Echaide, MEP Cavazzini and María del Carmen Squeff, Undersecretary for Mercosur and International Economic Negotiations at the Argentine Foreign Ministry, were all present online at the book launch.

The agreement allows access for Mercosur firms for certain products to the EU market free of import duties. Other products are subject to quotas for preferential access. Meanwhile for the EU, this agreement means commercial access to the most developed region of South America.

The end of these extremely drawn out negotiations, remarked the book’s authors, is indicative of the EU’s efforts to establish itself as the international defender of Free Trade. In contrast to the United States, which in its trade war with China, seems to wish to withdraw and defend it’s national economy, the EU has become a “compulsive negotiator” of trade agreements that offer both tariff reductions and which also facilitate the circulation of capital.

One of the crucial aspects of this agreement is that it binds two trade blocks that are vastly asymmetrical in trade terms. “This is an historical fact: Mercosur sells primary products and raw materials, while the EU exports high and medium value-add manufactured products. This agreement will amplify these asymmetries, providing incentives to extend this industrial agriculture model based on glyphosate and fertilizers made from fossil fuels. South American industry on the other hand will not be favoured, quite the contrary”, said Dr. Ghiotto.

She also noted that the accord would facilitate the penetration of European manufactured products into sensitive local markets such as cars, autoparts, machinery, chemicals, textiles, footwear and medicines.

Argentine industry — today with 35% import tariffs on automobiles and between 14% to 18% on machinery – has a fixed schedule of a maximum of 15 years from the date of signing, to gain equivalent levels of competitiveness as those of European firms, which generally benefit from lower financial and energy costs. This is one of the largest benefits of the agreement for European firms, for whom this treaty would represent four billion euros in reduced tariffs for their exports.

Mercosur economies face a different panorama for their industrial sectors, the insertion of EU-sourced elements into their local supply chains will cause disruption. While Mercosur specialises in exporting agricultural products outside the region, within the block Brazil and Argentina interchange mainly manufactured goods, many of them car parts.

The EU-Mercosur agreement could reduce Brazil’s purchase of Argentine products, this could happen in the metallurgical sectors, in autoparts, as well as processed foods products like olive oil and cheese. This would leave Argentine manufactures deprived of its main market. “The increase in the presence of European products on the Brazilian market will be at the expense of the Argentine and, partly, on Uruguayan industry”, the book highlights, although even so, opposition to the agreement has not yet formed, the authors add.

The agreement is not something reflecting European popular opinion, as can observed by the fact that most of the critical voices, raised until now, have been European ones. The agreement faces it’s most fierce opponents in EU agriculture, though there have already been a series of environmental tensions building beforehand, these exploded in August 2019 when the Amazon fires burned on the covers of global media, many of these fires presumably intended to expand agricultural frontiers to produce more exportable agricultural commodities.

Environmental controls in agriculture are much less stringent in Mercosur than in the EU, which is why — the book emphasizes — that it’s “not only trade asymmetries that exist between the blocks; but also regulatory asymmetries”. The book goes on to give a lurid example, the so-called, “Operação Carne Fraca”, relevant because Brazil is the largest exporter of beef in the world.

This scandal was triggered when the Brazilian Federal police exposed that the country’s main meat producers — including market giants like JBS and BRF — had been adulterating rotten beef and poultry for export, changing the expiration dates, and hiding the bad smells with chemicals: “This issue is extremely sensitive for European consumers”, noted the authors.

Similar precautions apply to Ractopamine use in pigs – a hormone given to animals to increase muscle mass, which is allowed in Brazil – and genetically modified organisms (GMOs), approval for which varies across the EU. “These issues have a huge impact on what consumers find on the supermarket shelves”, the book adds.

The report is full of examples demonstrating the irrationalities of international trade, such as food products that are produced within a few kilometres of where they are consumed “will now travel 10,000 kilometres in vessels from, for example, Rome to Montevideo”.

The treaty also effects changes in public procurement, since the agreement allows States to award contracts to European companies under the same conditions as local ones. Opening public procurement in Mercosur States which, as described by Dr. Echaide occurs at multiple levels, at the State level in centralised purchasing, such as by national ministries, agencies and national universities, but also at sub-national levels such as provinces/states and municipalities.

“Those negatively affected will include cafés operating in public universities which are often concessions run by small and medium-sized enterprises (SMEs) or cooperatives, these concessions will have to compete with European transnational companies, such as Segafredo, a well-known Italian company that is already operating in airports and shopping malls worldwide”, said the lawyer.

“I see a very large imbalance.  I think the current government, of which I am part, does not view this agreement in such a positive light”, said Ambassador Squeff during the presentation, while recounting the necessary steps that this accord needs to pass through to be ratified such as local parliaments in Mercosur countries, “Where we hope to show all of our positions on the agreement. ” she added. The ambassador also mentioned that the Argentine Foreign Ministry has already begun a round of consultations with the private sector.

Gerhard Dilger, director of the Rosa Luxemburg Stiftung’s Southern Cone office, greeted the debaters and celebrated the launch, which was popularised via the hashtag #TratadoVampiro (Vampire Treaty in Spanish). “Why ‘Vampire Treaty’?” he said, “because multinational corporations want to suck the blood of the Global South”, but also because, as the US author and Attac pioneer Susan George said: “These treaties are drawn up at night, in absolute secrecy”.

Acoording to him, there is a solution at hand: “When they are exposed to the light of day, when we, as civil society, promote transparency and we make known, as we did with this very good study, realities and implications, then these treaties can easily die.”

The first version of this article was published on 28 June 2020 in the Buenos Aires daily newspaper Página 12; Translation: Tony Phillips