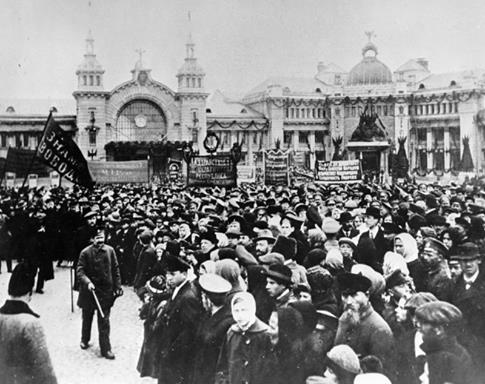 By Michael Brie
On the night of November 7th, 1917 (October in the old Russian calendar), when it was clear that the Provisional Government was being overthrown in Petrograd, Lenin said to Trotsky in German: “It can make one dizzy.” The major goal was achieved: the workers, as the Bolsheviks saw it, seized power in one of the most influential states in the world.
Lenin was said to have danced in the snow when this power lasted longer than the 71 days of the Paris Commune. In the end, it took 74 years before the Red Flag would be removed from the towers of the Kremlin.
The politics of the Bolsheviks in October 1917 split Russia’s left, then Europe, and finally the world. The effects are still felt today. Lenin’s legacy cannot be rejected, but it also cannot be accepted.
To begin, why can’t this legacy be renounced? Three reasons.
First: The Russian Revolution of 1917, beginning in Petrograd in February, was a revolution carried out and defended by large parts of the workers and soldiers of Russia. It meant a radical break with the politics of the Tsarist Empire and its ruling elite, who denied basic social rights to peasants and workers, deprived freedom to citizens and withheld the right to national self-determination for the oppressed peoples of the empire. It meant a break with imperialist war.
When it became clear that the provisional government was neither willing nor able to honor even one of the two most important demands of the people – peace and land -, the alternatives emerged: Bolshevik rule under Lenin or military rule under General Kornilov. And the workers and soldiers made their choice: they turned to the Bolsheviks. Lenin and the Bolsheviks proved that it is politically possible to address the fundamental questions of the era resolutely from the left, and furthermore, that one can successfully lead a popular revolution.
Second: With the Bolshevik led uprising of October, forces came to power that took socialism dead serious, which can not be said of the right-wing Social Democrats in Germany a year later. When Lenin realized in autumn 1916 that there was a realistic chance of carrying out a socialist revolution in Russia, he began a renewed intensive study of the works of Marx and Engels. He appropriated their ideas of socialism and communism, of the state after the revolution, and the dictatorship of the proletariat. All this can be read in his outline Marxism and the State and his treatise State and Revolution. It is undoubtedly his one-sided interpretation of their works that comes to the fore.
But he borrowed a great vision from them. The left-wing Menshevik Nikolai Sukhanov remembers Lenin’s speech in April 1917: “Suddenly a bright, dazzling, strange light appeared before our eyes, which blinded us to everything that had been our life until then.” Without this immensely attractive vision of a socialism of the free and equal based on rule by the people, the Bolsheviks would not have won the terrible civil war between 1918 and 1922.
Third: Lenin proved to be a cutting-edge strategist in 1917. He was able to reap the legacy of an almost 25-year development of a workers’ party anchored in the Russian masses. In August 1914, he was one of the first and few to make a forceful break with the politics of the so-called fatherland defense, and, like Liebknecht, proclaimed war against war. He appropriated the dialectical foundations for a politics of breakdown in times of crisis.
By studying the literature on imperialism, he recognized more clearly than anyone else that the weakness of this system lies in the national question. He formulated the most effective solutions at the right time and was able to persuade his own party repeatedly through tough democratic debates. Anyone who wants to learn a strategy for the left in times of existential crisis must study Lenin.
Yet it’s also true that Lenin’s legacy cannot be accepted. Leninism as an intellectual-political system should have no future in the emancipatory left. There are also three reasons for this. 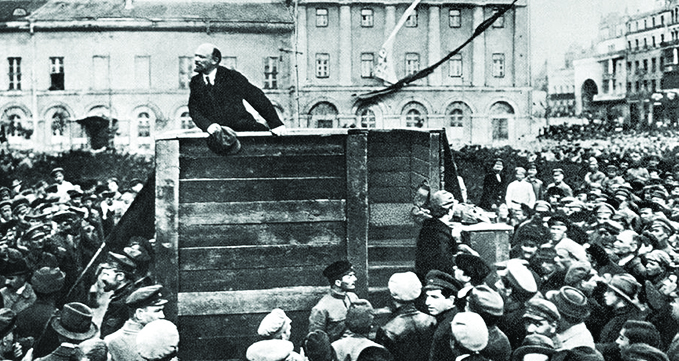 First: The Decrees of Soviet Power, written by Lenin, initially concerned the issue of land for peasants, and the offer of peace to the peoples of Europe. It is less well known that one of the very first steps of the government was to restrict press freedom. On the third day of its existence, the Council of People’s Commissars adopted a corresponding decree, also drawn up by Lenin. It dealt with the press of the wealthy class, who had the printing shops at their disposal, and could pass off their own privileges as freedom. Soon, the “fullest freedom” would be restored. In a few years, however, the freedom of speech was suppressed.
The “publicly owned” printers were by no means freely available to the people. A state party decided with full authority what was to be printed and what was not. But freedom is always the freedom of dissenters, as Rosa Luxemburg knew, and it is not so easy to get.
A little later, in January 1918, the Constituent Assembly was dissolved. In the months following, the Soviets lost their democratic character. The ban on factions in 1921 subjected the party to a leadership that was no longer freely elected. From then on, political contradictions were settled only by arms or simply suppressed.
Second: The grand vision of the working-class movement of the nineteenth century, especially that of Marx and Engels, proclaimed that the emancipation of the workers must be the work of the workers themselves – as the revolutionary practice of changing circumstances and self-changing. Such emancipation, however, requires the struggle for and protection of the liberties of assembly, self-organization, democratic articulation, and nonviolent resistance.
In the so-called radical-democratic work of Lenin’s State and Revolution, written before the seizure of power, the following fatal, completely undialectical sentence is found, referring to the “withering away of the state” in the transition after the revolution: “It is clear that there is no freedom and no democracy where there is suppression and where there is violence.” Democracy and statehood are conceived as absolute opposites. Yet Lenin himself recognized in the same text that the dictatorship of the proletariat is also a state, and, like every state, uses violence – particularly against the workers to enforce the “bourgeois” right to pay for equal performance.
Thought through to the end, this sentence means that every state, even the state of the victorious workers, becomes a state without any freedom, without any democracy. Indeed, after the victory in the civil war, the Bolsheviks completed and systematized exactly this suppression of freedom and democracy against the workers and peasants, let alone the intelligentsia and bourgeois circles.
Third: The idea of socialist property as the property of everyone was implemented by the Bolsheviks in such a way that “everyone” becomes an owner only jointly, in the form of the state, through centralized control. Marx’s notion in Capital that, at the same time, this property must be “individual property” based on “cooperation and the possession in common of the land and of the means of production” remained unfulfilled.
Socialist property, however, is a moving contradictory relation between individuals, groups, and society as a whole. When socialist property is reduced to the societal pole, it destroys the possibilities for the free development of each and every individual to be a condition for the free development of all in solidarity.
The legacy of the Bolsheviks and Lenin can make one dizzy, if their contradictions are left unchallenged. But only those who know how to handle the contradictions of emancipatory movements, who can find ways of working through them with solidarity, will ultimately be able to pursue a politics of the left at its best—by learning from Lenin and, even more so, learning from the criticism of Lenin.