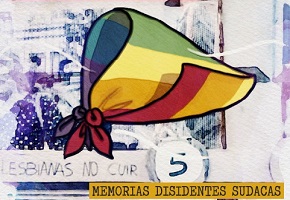 Posted at 15:12h in Internationalist feminisms by Alex Wischnewski
0 Likes

Is it possible to construct an LGBTQI+ memory of state terrorism in Argentina? We interviewed Cristian Prieto, a journalist, activist, and researcher about LGBTQI+ disappeared during the last military dictatorship.

What aspect of the of the last Argentine military dictatorship is the idea of Memorias Maricas attempting to render visible?

Cristian Prieto- Memorias Maricas is an idea that refers to the whole LGBTQI+ population that was disappeared during the period of the civilian-military dictatorship in Argentina, between 1976 and 1983.[1] We argue that there is a black hole in relation to the history and biography of gays, lesbians, and travestis during the dictatorship. We are interested in initiating a conversation about what happened to this community during the dictatorships not only in Argentina but in Latin America as a whole, and asking if we could hypothesise that, as there was a Plan Condor, the plan that persecuted political activists across Latin America, there could also have been a Plan Condor, but in a Pink key, in an LGBTQI+ key.

To do so, we formed a collective during the pandemic, called Memorias disidents sudacas. Our proposal is to construct a different epistemology in relation to memory studies of the last civilian-military dictatorship. While in these more than 45 years since the last dictatorship, considerable theoretical material and reconstruction of activism has been produced, the same way of investigating does not serve us for analysing what happened with the LGBTQI+ community. First, because looking at how processes of reconstruction of memories have occurred in Argentina, it is impossible not to speak of the Mothers of Plaza de Mayo, the Grandmothers of Plaza de Mayo, the Asociación de Ex-Detenidx Desaparecidxs, and Familiares de Desaparecidos y Detenidos por Razones Políticas. The particularity of these organizations is that they have to do with a family issue, with an issue of blood family. This is a point that differentiates the LGBTQI+ community when it comes to knowing that happened with our disappeared, here we face a great limit, because we are going to research people from our community with whom we do not have a blood relation. Therefore it is already very difficult for us, both to access archives, to be able to think about issues related to justice, and also because this issue of the “family” is so strong in the patriarchal system. Then, the first thing that we come up against when we talk about desaparecidxs in an LGBTQI+ key is the limitation that are arises when we delve into the history, the institutions, the archives, about people who are not our family and that is a very big limitation.

Why, despite everything, is it important to dispute cis-heteropatriarchal memory?

CP- Because in order for us to be able to investigate and understand recent history, but with a focus on our own community, we absolutely have to break with that cis-heteropatriarchal view of the “revolutionary militant” and also break with that view, held by many sectors of traditional human rights’ agencies and organizations, in which the focus is only on political prisoners, those detained for political reasons. Because those who were detained due to police edicts at the height of the dictatorship are not considered political former detainees or disappeared, because they were not activists, they were not militants in a specific political organization.

Then, that is the first thing that we break in regards to that cis-heteropatriarchal vision. Because many of us say that our community was clearly considered a risk for the canons and the military dictatorship’s objective, which was a society based on the tradition of the family, private property, and a morality adapted to those ideas, which obviously had to do with a morality that was Catholic, Christian, and did not touch the amoral. I mention this about “morality” and “amorality” because they are terms that are going to be used a lot talk about our community, they considered us sexually amoral, they thought that we have a morality bordering on the improper. We are going to look at things differently. We are going to look at people who were marginalized due to their sexual orientation or their gender gender identity, and because they were considered thus, at that time, not only be state institutions, by security forces, but also by revolutionary parties themselves, by those same revolutionary organizations that saw homosexuality as a bourgeois deviation.

Is there official recognition of these dissident memories?

CP- The state does not recognize this. It argues that, as there still has not been research that can account for what happened to diversities during the last military dictatorship, it cannot say that there were human rights violations against that sector. The state is truly ignoring those of us who have been carrying out this research for some time now and, by denying this, it is revictimizing our community again in relation to this issue, this emerging question, which is: What happened to gays, lesbians, and travestis during the dictatorship? Since there is research regarding the intelligence archives, testimonies that continue being recorded in relation to the captivity of travestis, of homosexuals, this is truly to deny an important part of history and a double invisibilization of our group.

[1]  The military dictatorship implemented a systematic plan of detaining and disappearing people that culminated with 30,000 disappeared people, 500 children kidnapped and appropriated, and countless situations of detainment, rape, and torture by the repressive forces in power, with church and business complicity.