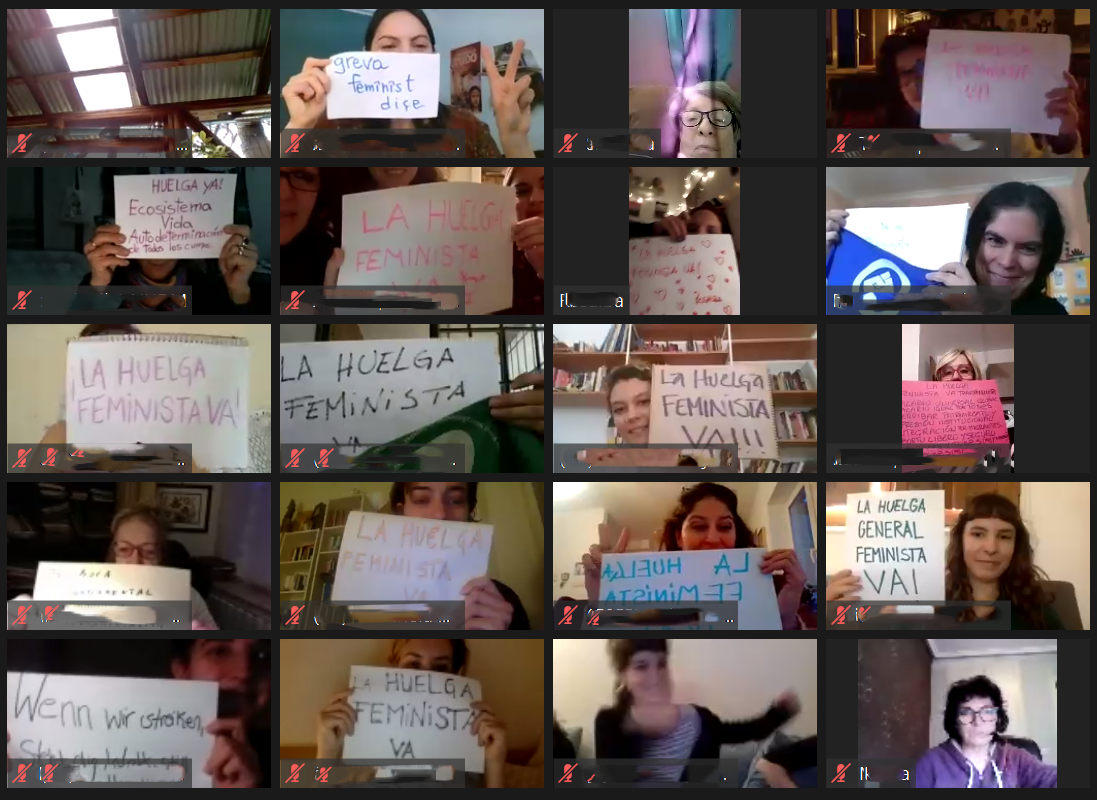 Posted at 09:33h in Internationalist feminisms by Alex Wischnewski
0 Likes

In this interview, activists from the Feministas Transfronterizas (engl. Transborder Feminists) space tell us about the articulation and operation of that space that brings together feminist collectives and organizations from around the world to coordinate for the international feminist strike and beyond.

Feministas Transfronterizas is a transnational space of articulation of feminist, transfeminist, and anti-patriarchal collectives, grassroots organisations, and social movements. Its fundamental objective is to generate a collective, plural, and political space that is capable of connecting and expanding feminist power and struggles on a global level, in order to build political practices and discourses that aim to overturn the patriarchal, capitalist, colonial, and racist organisation of society.

The space was born out of the experience of building a transnational network for the feminist and transfeminist strike of March 8th 2020 and recognises the practice and political process of the strike as one of the tools that best unites our practices of struggle. The call to generate this type of cross-border space came from the Chilean comrades of the Coordinadora Feminista 8M, and was immediately welcomed by many feminist, transfeminist, and anti-patriarchal collectives and movements globally, which initially gathered to draft a joint transnational Manifesto for March 8, 2020. (The Manifesto can be found here: link and the different translations here). Since then, the space has progressively grown to include comrades and voices from many situations and experiences all over the world.

In 2020, with the global pandemic disproportionally impacting women and LGBTQIA+ persons, a strong need emerged to converge and articulate a cross-border feminist analysis of the crisis and strengthen our solidarity and struggles.

Feministas Transfronterizas is a space in which plural voices of collectives, movements, organisations, coordinators, articulations, and networks, from different contexts and places, interact and are united in the struggle against male violence, exploitation, racism, and colonialism. The articulation of the space does not aim to homogenize positions, but rather to value our differences and give collective voice to our plurality of struggles, practices, and discourses. Indeed, it is an inclusive space that strongly believes in the continuity and convergence of every struggle undertaken individually and collectively by every woman, LGBTQIA+ persons, migrants, workers, Black, Afro-descendant and Indigenous peoples who rebel against patriarchal, racist, and capitalist violence. We value this heterogeneity of struggles and intersectional perspectives as an integral part of the global feminist movement, challenging the logic of the nation state and borders. In this sense, we value the global feminist strike not only as an event that takes place on March 8th, but as a continuous process able to connect and strengthen all our struggles and to constantly tackle patriarchal, racist, and capitalist oppressions. We strongly believe that a transnational feminist space of organization like Feministas Transfronterizas could be able to reactivate, politicize, connect, and expand all the struggles we undertake in our local territories. We have organized all our events this year with this spirit, such as the transnational feminist event on May 1 called “the strike lives in our struggle” (Find the Facebook event with our statement here and the video of presentation).

Feministas Transfronterizas is a space that strongly asserts its autonomy and collective self-determination in all its forms of expression, practices, and actions. It is a space that has strongly distanced itself from practices of conditioning, leadership, hierarchy, and party representation. It rather builds on alternative ways of building and facilitating relations. Taking care of the autonomy of this space means that no party or trade union can instrumentalise or appropriate the campaigns of the space itself and that we collectively care for developing and spreading our autonomous political discourse that is able to value our different struggle in the common process of the global feminist strike and common political horizons.

What are you planning on March 8th?

For the 8th of March we are collectively writing a transnational manifesto for the strike, in which we will gather all the claims come out of the public global assembly on February 7th and affirm the importance of the process of the feminist strike to overturn and stop the patriarchal, capitalist, and racist organization of society. During the assembly there was a strong call to mobilize ourselves and reclaim the public space and discourse, with care and attention.

In most of our territories we are calling a productive and reproductive strike, with the support of unions, because we know that this year our strike is even more essential to make visible the increase in male and gender violence and exploitation we have witnessed during the pandemic. Our strike is essential because it allows us to break the isolation of this pandemic and find a collective voice to rebel against patriarchy and affirm feminism on a global scale. We are also thinking about possible ways to connect and render visible on a global level all the struggles we are carrying out in our different territories for March 8th. At the moment, we only have a few ideas, such as using the same symbols in our demonstrations for the March 8 (for example the green pañuelo); or doing a Facebook event where we can share all the initiatives that are taking place around the world for March 8th.

Who can take part in it and how can they get in touch with you?

The Feministas Transfronterizas space is currently made up of 65 feminist, transfeminist, and anti-patriarchal collectives and organizations from all over the world. The space is not open to individuals. Therefore, the women and LGBTQIA+ persons actively engaged in the space act as bridges and links between the space and their local collectives/organizations. The relationship and dynamics of facilitation between the local and the global is of crucial importance. In this sense, we do not speak in a personal capacity, nor as representatives, but as facilitators of our movements/organisations/collectives. In order not to lose out on contributions from individuals, the space will organise regular open assemblies in which individuals’ participation  will also be facilitated (as was done in the assembly on February 7, 2021)

To participate in the space you can write to us at [email protected], sending us a brief presentation of your movement/collective and a couple of names of reference from your movement/collective, that we can include in our internal mailing list. In order to keep our communication and practices simple and effective, we include only two or three people for each collective/movement in our internal mailing list. This does not mean that only two people per collective can participate in our internal meeting: you can rotate with other members of your collective or have more than two participate. Still we would like to keep a limited number of people on the mailing list, who can then pass on the emails and communications to the other comrades of their local collectives.

We also have an internal and organizational telegram group which is open to all comrades who participate in the space without limitations regarding the numbers from each collective (but not open to individuals).

Finally, we have a telegram channel that is open to everyone, even to individuals, that can be used to circulate initiatives, alerts, and solidarity campaigns. Here is the link to join the channel:  https://t.me/FeministasTransfronterizas

The primary language of the space is Spanish, as many collectives from Latin America and Abya Yala participate in it and we value the centrality of the practices and discourses of these collectives in our space. Yet, in our meetings we always try to have translation into English or other languages available for those who do not speak Spanish. Additionally, we always translate all our communications, documents, and calls into as many different languages in order the reach the most number of people possible.