Being Trans in Spain 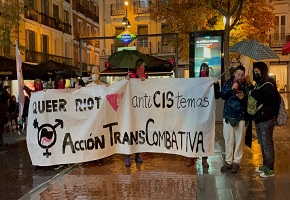 Posted at 15:30h in Internationalist feminisms by Alex Wischnewski
0 Likes

The Acción Trans Combativa collective in Madrid is a strong force within the fight against fascism and conservatism, as well as within the feminist movement. Interview with Kiar Ciotoli.

What is Acción Trans Combativa? 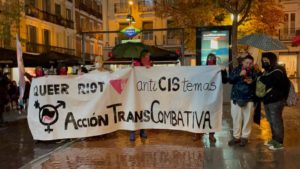 Kiar Ciotoli- It is a collective of trans and non-binary people who question gender. It defines itself in an antifascist, anticapitalist, anti-ableist framework and works along several lines, one of the most important being to generate a safe space for encounter and reflection that can connect trans people or those who do not correspond to the cis-heteronormative model and to generate networks and think collectively about how to inhabit this city that is often very hostile for our lives. On the one hand, we work from within to create safe spaces, and, on the other hand, we organize activities, actions, event directed externally, connecting us to different struggles. We have primarily been in contact with movements working on anti-psychiatry, anti-ableism, and, in general, all the organizations that define themselves as anticapitalist.

How do determining factors of gender and sexuality intersect with other issues such as social class, race, and migration in people’s living conditions in Spain?

KC- From the perspective of trans, anticapitalist, antifascist, etc. activism, we understand that conditions of gender and dissident sexuality in general are in constant communication with other axes of oppression since defying the cis heteropatriarchal norm means defying an economic model constituted on the basis of the monogamous heterosexual family that is the central unit of the current oppressive economic system – capitalism – and is also what fuels racist and colonial exploitation. Then, when one defies one of those normative axes, whether sexual orientation, gender expression, or gender identity, there is something that upsets that whole framework of norms. Beyond that, which is from the more theoretical point of view, in reality this leads to precarious lives because, when dissident gender violence is experienced, access to many things becomes limited, making your life more precarious. It is, as we always say, that trans women and bolleras are the working class. Why are we the working class? Because it is difficult for us to access dignified work, housing, the resources of the welfare state. What subjects is this welfare state designed for? It is clear that we need to be capable of seeing the intersection between various oppressions and identifying the subjectivities that occupy those marginal places. Because often if we look at the axes of oppression separately, we run the risk of reproducing many of those oppressions within our our group. For example, there is clearly a historical power relation among the LGTB community of white gay men who have always been the visible face of that group and, in reality, many power dynamics are reproduced there. And the privileged – white, male, cis – subject continues maintaining its privileges.

What is involved in the demand for a Trans Law and what are limits of transformation through legislation?

KC- In terms of the Trans Law, which has been the center of political debates among trans activism for a year, there are several different positions and consequences. On the one hand, by putting the issue of the self-determination of bodies up for public debate and onto the political agenda, it has a positive effect because it forces cis heteronormative subjectives and realities to acknowledge things that they would not have otherwise, this plus side of visibility cannot be denied. But, there is another side, that, of course, is making it so that a lot of energy is lost in this process, as well as many possible alliances between dissident bodies since, suddenly, activism is focused on something that is mediated by very institutional dynamics and many activisms do not share that vision and do not need the State’s legitimacy in order to exist.

Then, this creates a rupture between more institutional organizations that center, as the objective of their activities and activism, getting this law pass – which, like any institutional process that goes through parliamentary debates, is being watered down – and people who matter the least for this racist and heteropatriarchal system, such as migrant persons who will be left out of the law, trans youth, or non-binary people, all of us who do not matter, who are going to be left out of the law, and, in the meanwhile, we have lost all our energy fighting for a law that is not even going to change our material or symbolic conditions. Personally, I think that, in general, we should not waste so much energy on institutional processes and we should dedicate ourselves more to creating self-managed situations, safe spaces, places in which to meet without institutional mediation, that should be the center of our activisms.

What do you mean when you say that we need to recover the movement’s historical memory?

KC- I think we are referring to learning and recognizing, above all, which bodies and subjectivities have been present in struggles and allowed us to experience the material conditions that we have now. And understanding what their discourses were, what discourses are used today, and the path that has taken us to some discourses and not to others. Knowing this is super important because it serves as an antidote to trans-hating discourses, for example, that are being deployed today, as well as the appropriation of some theoretical bases that have been produced from the margins and are suddenly being used as weapons against those dissidences themselves. Therefore, recognizing and legitimating, and opening space for dissident historical narratives is fundamental. The hegemonic discourse constantly works to hide, to erase all that history, and, thus, from the margins, we have the obligation to recover those voices.

Above all, in Madrid, there is a very great difficultly in recognizing the political value of sex workers, for example, and there is a very strong abolitionist part of feminism that does not use an antiracist lens to look at its demand for the abolition of prostitution through white institutions. All of these issues remain unexamined. Recovering historical memory can play a fundamental role in all of this.

Is there a conservative reaction in Spain right now? What are its characteristics?

KC-In terms of the conservative reaction in Spain, it is taking place in the general colonial European framework and it is clear that all of history teaches us that when living conditions are precaritized, discourses that appeal to fear find a very fertile territory for expanding and finding support from many people who are afraid. Personally, what I am most worried about and where I would focus attention is on a whole sector that should be allied, or that should be generating alliances, that suddenly within the sectors that frame themselves as part of the left, anti-trans discourses are taking hold that are very similar to right-wing discourses, that is what worries me the most. What harm is being caused by that? Because if we are not able to oppose the extreme right’s discourse and politically side with those on the margins, how are we going to resist this? In Spain, in particular, I think there is a very large problem especially with racism, of course, and its derivatives, such as the abolition of sex work that implies hiding many of the voices of migrant and trans sex workers who are suddenly being attacked by these white feminisms. What is behind this conservative reaction of the extreme right? These feminisms are serving up all the arguments for them to hate us.

How is the debate over feminisms’ subject taking place within the feminist movement in a broad sense? What do you all propose in regards to this issue?

KC-The debate over feminism’s subject has been generating a lot of conflict, many misunderstandings, here in Spain for years. For me, it has a lot to do with the difficulty that the subject of the cis-hetero white Woman, with capital ‘W’, is having in recognizing herself not only as an oppressed subject, but also as an oppressor subject who exercises violence. And, as long as they do not recognize themselves there and remain in the role of the victim, and the role of the victim is also capable of exercising a lot of power, they have a lot of power from there, as they exclude other subjectivities that are also being violated by the cis hetero racist patriarchal system, which are also suffering the consequences of all of this but, of course, their voices are not as legitimate as those of women. Later this has its consequences when it comes to the demands that are made toward institutions: who can, who cannot, request that public policies being articulated in Spain correspond to the needs of a type of subject that is the white cis-hetero woman. Already at the moment when we consider who has the legitimacy to decide who enters and who does not fall into the category of feminism, there we have a deep problem and I think that review of the general category of feminism, feminisms is necessary. It is very striking how in the last massive feminist mobilizations there is the sensation that we have to ask permission or give thanks to feminists for letting us come into their space. From that position, it is very difficult to feel that it is your space. And it is very difficult to generate resistance against the extreme right discourses if we have to ask permission to “enter” feminism. What is being proposed is to look at who is exercising pressure within feminism itself and afraid of losing those privileges. And the response of that trans-hating feminism with its slogan of “erasing women”, has a lot to do with the fear that, suddenly, their cis-hetero identity will be put up for debate. It is like the dissidence is coming and says that being a cis woman is also oppression, no, that cannot be.

What are the biggest challenges for LGTBQI+ dissidences at this time?

KC- There are many challenges for gender-sexual dissidences at this time, I think. One the one hand, we must begin to question the type of activism that we are carrying out, which often reproduces productivist, capitalist dynamics, that we require certain rhythms… produce, produce, produce protests, discourses, putting the focus there and not on everyday care, in generating networks, which seem to occupy a smaller role. And I also think it is necessary to question the identitarian categories that have been created and that also often involving exclusion in terms of who is let in and who is left out of those categories. Then, we also raise the question of to what extent identity politics can be helpful to us or is it just another tool of exclusion. There is always a part of the movement that has been very problematic when it comes to articulating demands, deciding what we focus on, because there is always a tension between those who resist letting go of gender binaries and a heteronormative model, it seems that part of the collective wants to become part of that norm and another part articulates its discourse in rejection of that norm. That is another issue that we have to be able to dissect.