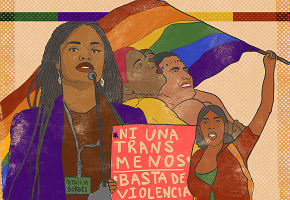 Posted at 15:05h in Sin categoría by Alex Wischnewski
0 Likes

What is it like to be a trans and Black woman in Bolsonaro’s Brazil? How can one survive being not only an activist but also a politician? Patricia Borges is an example of a political feminist disruptive trans woman who does not ask for permission.

By Luciana Peker for @Semillas.de.resistencia

– I had to do things that I didn’t want to do to get the things I needed, she recounts.

Her body is political. Her striking beauty stands out from afar, it is magnetic from up close. She needs to be on the defensive against attacks. Armor is part of the pain that remains in a body that carries the marks of blows like tattoos that are neither chosen nor forgotten.

– The only choice that many have, unfortunately, is prostitution and selling their body. It was not what I wanted, but it was what I had to do in order to exist, she explains.

A black necklace looks good on her and the white spiritualizes her odes to Bahian entities, carnival makes her shine, and her activism can be seen on the t-shirts she wears on a body that is hers and, at the same time, a compact in which collective rights can be seen in the mirror.

– My body is activism, she defines.

One shot, three blows, several counts, too many wounds and one major gunshot received while handing out fliers for Erika Hilton, the São Paulo deputy for whom she works as an advisor. “I was attacked at gunpoint during the campaign. Two people attacked me on an avenue of São Paulo while we were distributing pamphlets. There are still people who do not accept trans people occupying positions of power”, she denounces.

The Evangelical caucus does not allow any bill containing the word “gender” to advance in the São Paulo Legislature. She reclaims, “We want to stop being persecuted in the Municipal Chamber where we are accused of ‘gender ideology’, which is something that doesn’t exist, but that the radicalized Evangelical sectors use, to say that we persecute families”.

She does not persecute families, but she did suffer persecution from her father. She does not ask for permission. The only thing left for her to do is to keep moving forward.