Toward the Depatriarchalization of Energy

25 Aug 2022 Toward the Depatriarchalization of Energy 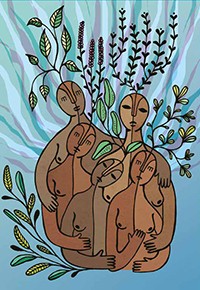 Posted at 15:15h in Internationalist feminisms by Alex Wischnewski
0 Likes

Energy as a Field of Dispute

The conception of energy that has been imposed since colonial times is founded on a predatory anthropocentrism, in which Nature is presented to us as a sort of container of natural resources and raw materials to be exploited to generate profit in international markets. This lies in fundamental opposition to the profound ecosystemic interrelation that the majority of Indigenous peoples have sustained.

Thus, Capitalism (and its diverse expressions) has sustained itself through the structural destabilization of ecosystemic balance. With the expansion of large cities and the consolidation of agribusiness, energy is appropriated by overburdening ecosystems. This decreases the productivity of the land, due to its over-exploitation, increasing the need to provide more energy so that production does not diminish (Fernández and González, 2018). Along the way, the domination of energy also became the domination of bodies, territories, and peoples; corporations and major economies had to accumulate energy for their energy consumption through the colonization and exploitation not only of peoples, but of Nature itself.

Depredation, degradation, and the current climate crisis are the result of climate change caused by this model of accumulation and death that is capitalism. Not all people or groups of people are responsible, but, to the contrary, Indigenous peoples, Afrodescendents, migrants, peasant and popular-urban sectors have been and continue being essential agents to “cool down” the planet through our practices of protection, restoration, and regeneration of ecosystems.

The Energy Transition in the Global North as a False Solution

As feminists belonging to socio-environmental movements of Abya Yala, we think it is fundamental to base an energy transition on the self-determination of peoples. This makes it necessary to carry out a profound critique of the Global North’s imaginary of an energy transition, in which the capitalist hegemony of colonial economies is perpetuated and the territories of the Global South continue being suppliers of badly-named “raw materials”.

Thus, this type of transition is a falsity, since it does not call for overcoming extractivism, but rather, to the contrary, it maintains extractivist expansion as the basis of the economic model (Xarxa per la sobirania energética).

In this scenario, we see the growing concentration of ownership of electric companies, the entrance of Chinese investment, the approval of free trade agreements, with the implementation of an energy matrix based on hydrocarbons in which the beneficiaries continue being the mining and industrial sectors, and not the people.

In Chile and other territories of the continent, this supposed transition is characterized by the expansion and new exploration of lithium, copper, green copper. New mining is also emerging, of rare earth minerals, with the presence of more than 500 renewable energy projects (wind and sun energy),[1] and, primarily, through a supposed change in the matrix based on the exploitation of green hydrogen.

We could say that this type of transition enacts a “green” extractivism, in which traditional extractivism is intertwined with false solutions, such as water mining, further intensifying energy poverty and ecosystem damage. This is done through the implementation of non-conventional renewable energy projects, such as mini-hydroelectric plants, which can evade environmental assessment systems. Perhaps even more importantly, this takes place in the context of a Global North that is not willing to change its mode of life and consumption patterns, and therefore will continue to increase repression in territories and the criminalization of defenders of Nature, to ensure investors’ profits. That is how energy has become a field of dispute and its self-determination has become a site of resistance and self-defence against the extractivist onslaught.

In Chile, for example, most hydrocarbons are imported, meaning the country depends on oil, natural gas, and coal for energy. At the same time, there is an over-production of energy: twice as much energy is produced as is consumed. The residential sector only consumes 16 % of the energy generated.[2] All of this takes place in the context of the concentration of electric production in three companies (Endesa, Colbún, and Gener) and a water code (1981) that allowed the privatization of that common natural element through the granting of use rights.

Energy as Colonial and Masculinized Fields

In a neoliberal country such as Chile, the management of energy is based in a model of structural inequality, in which the concentration of wealth is privileged at the expense of sacrificial territories, declared oversaturated zones due to the presence of sulphur dioxide and chemical waste in the presence of industrial complexes, refineries, and thermoelectric plants. In those territories, the precarization of life occurs daily given limited, masculinized, and flexibilized job opportunities.

Today not only must we continue fighting against the expansion of extractivist agents and activities that degrade ecosystems, such as mega-mining, agribusiness, and the forestry model, but also against a neoliberalization of the energy transition at the hands of States and large “eco-capitalist” corporations, that maintain a structure of colonial domination and commodification of Nature. But not only that, besides being a colonial field, energy has been a masculinized space, in which structural violence against women, girls, and sex-gender dissidences are intensified in territories of mining, oil exploitation, and the presence of hydraulic works (Colectivo Miradas Críticas del Territorio desde el Feminismo, 2017).

We cannot forget the murder, or rather the corporate feminicide of Macarena Valdés Muñoz in August 2016 for opposing the construction of a hydroelectric plant in Tranguil, Panguipulli, by RP Global, today RP Arroyo, and the feminicide of Javiera Rojas, a socio-environmental activist from El Durazno, Combarbalá, in Calama. While in this latter case, Javiera was murdered by her partner along with another subject, Calama is the epicentre of mega-mining, where a territory has been consolidated through a masculinized economy in which human trafficking and the drug trade are interconnected with the prevailing extractivism and, in turn, sustain that masculinized economy. The dispossession, precarization, and violence that are experienced in extractivist territories are also inhabited by feminized and racialized bodies (García-Torres, 2016).

Toward a Post-Extractivist Feminist Transition

From territories in resistance and a feminism of the people, our transition toward a post-extractivist world differs profoundly from what was described previously as a transition from the Global North. Our position recognizes that a central idea is to understand energy as a social right from and for the sovereignty and self-determination of the people, necessarily involving processes of decommodification and deprivatization of Nature (Ulloa, 2016).

Community energy autonomy involves dismantling the constituted power that has perpetuated the privileges and profits of one sector of society, through the certainty that we can living consuming less (many communities already do or have done so), respecting the cycles of Nature, through the protection and restoration of ecosystems. Because we conceptualize our understanding and management of energy by centring the care of bodies and territories as spaces of life, sowing and harvesting energy, as well as through articulation, solidarity, and mutual aid among territorialities, based on a crossborder, and thus internationalist, perspective. We are currently involved in diverse processes of resistance and recuperation of water, seeds, bodies and territories, in which we have interwoven the defence of Nature and Human Rights with energy.

Technological and productive reconversion does not, in itself, guarantee a structural change. Therefore, the consolidation of territorial, feminist, and solidarity economies, in which we position the economy and energy according to the cycles of the Earth and Nature, is the only way to move beyond extractivism (Vélez, 2006). We must stop thinking about energy as a commodity, promote territorial autonomy and local production according to the use needs and priorities of peoples and based on protecting ecosystems, fighting for an energy autonomy in which energy sources are administered/controlled by communities as a first step toward the transition, while also recognizing the ancestral energy practices of Indigenous peoples.